What Are The Psychological Effects Of False Accusations In A Relationship? 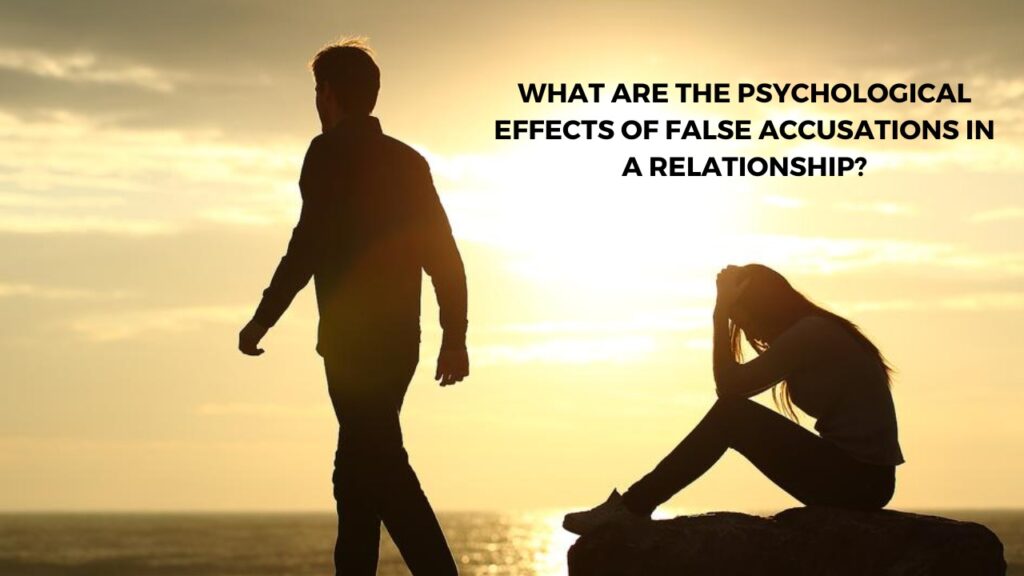 Accusations of lying can do long-term damage to both personal and professional relationships. When there isn’t trust, it’s hard to keep a close relationship with someone. When people are in a relationship, false accusations can be very bad for their mental health. It doesn’t matter if you are self-assured and well-balanced or if you are the opposite. If no one believes you, your sense of self may slowly go down.

How do you feel when someone you care about or who is in charge of you always accuses you of doing wrong? Another possibility is that the person being hurt is actually being tricked. So, their constant accusations come from anger or maybe even jealousy.

Gaslighters often use false accusations as a way to control their victims and get them to do what they want. They are meant to make the target doubt their own sense of reason and awareness of themselves. Gaslighters trick and isolate their partners in order to get them to give in completely.

False Accusations in a relationship render pressure on you

They’ll feel terrible about it until they can prove they are not guilty. Fear, anger, pain, frustration, and the loss of trust are all high on the list.

Stress caused by false charges can hurt a person in many ways, like giving them headaches, making it hard for them to sleep, and causing other problems with their mental and physical health.

Make you go all angry

False accusations can cause a lot of emotional damage to a relationship. It often makes them angry and leads them astray. If they keep making false accusations because they are angry, their partner may become more distant and resentful.

You feel a vengeful due to false accusations in a relationship

Even though anger and resentment are both strong feelings, they are not the same. When someone is angry, they want to get even. Once the demand for revenge or an admission of guilt from the offender has been met, the urge goes away.

Resentment is a way for your mind to protect itself from wrongdoing, but if you don’t deal with it, it can turn into a habit.

If you can’t figure out what went wrong, your opinion of your partner could change. If he keeps accusing you of cheating on them when you haven’t, for example, your anger can turn into resentment.

False accusations in a relationship can cause stress, as well as fights, resentment, and dislike. Anxiety can build up when you don’t know how a situation will turn out or if your partner will do the same thing again. But anxiety can last for weeks or months, making it hard to go about daily life.

Even if they haven’t done anything wrong, a person will lie to their partner if they think the truth will make things worse. If your significant other doesn’t like your friends, you can try to hide the fact that you had lunch with them.

Always trying to prove how reliable and honest you are can be bad for your mental health. Because neither partner is sure they can trust the other, mistrust grows.

How to deal with the psychological effects of false accusations in a relationship?

Before you answer your partner’s worries, you should think about how you’ve been acting. Is your partner afraid because of the way you act?

Your partner may have noticed that you seem emotionally distant lately. Before going on, it’s important to think about how you feel and how you’ve been acting.

Think about how you feel

When accusations are made often in a relationship, it can be hard to stay calm. Give yourself some time to think about what you just heard without getting too down on yourself. If you’ve been wrongly accused, a good way to deal with it is to write in a journal about the people in your life and the role you might be playing.

Writing in a notebook can help you sort out your feelings and see things from a different point of view. This isn’t meant to clear the person who made the accusation. Instead, it’s meant to lessen the emotional impact of a false accusation. If someone doesn’t let out their bad thoughts, they could go crazy.

In relationships, making false accusations can make hurt and anger worse. When you’re protesting the truth, it’s hard to keep your emotions in check. Keep in mind that they are trying to figure out if you are being honest.

By doing this, they show you that they don’t know you very well. Be logical, get rid of all your feelings, and ask for proof. Try to get them to see that rumors and gossip shouldn’t be taken as the truth.

Get in touch with what you feel and how you feel

False accusations in a relationship can be hard to deal with if you don’t know yourself and can control your emotions.

The first step to getting to know yourself better is to ask yourself “why” you feel the way you do. If we try to figure out why we feel the way we do, we might get stuck in our own bad feelings.

Also read: Consequences Of Dating Someone With Borderline Personality Disorder

Pretend everything is cool

To get over the emotional effects of false accusations, you need to keep a level head. It takes time, practice, and often the help of an outside professional, like a therapist or coach, to learn how to control our emotions and act logically when we’re stressed.

Professional help will help you become more self-aware and understand how your mind works and what sets you off. You’ll learn to anticipate these situations and take a moment to think before giving a good answer.

As you can see, accusing your partner of cheating can hurt them emotionally and mentally. If you are wrongly accused of a major crime, it could destroy your sense of who you are.

But it’s important to remember that the problem is usually with the accuser, not the person who did something wrong.