Easy Steps You Should Follow To Make Beef Jerky Recipe 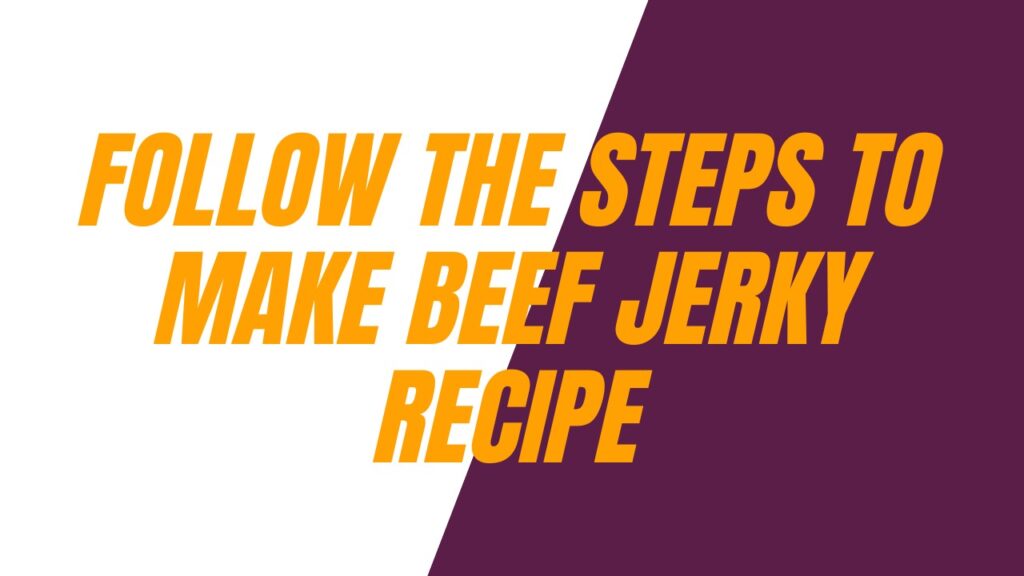 Whether you prepare it in the oven, the smoker, or the dehydrator, we will show you how to make beef jerky that is flavorful, chewy, and delicious every time you make it. Finding a beef jerky recipe that is guaranteed to turn out perfectly is not always an easy task. Some recipes call for ingredients that can only be used once, so few people keep them on hand, while others appear to need an excessive amount of time to be used on a daily basis. However, learning how to create beef jerky doesn’t have to be tough; we found a process that is easy to follow and consistently produces great results. There is no requirement for the use of any costly equipment.

The oven, a dehydrator, or a smoker are all viable options for preparing this beef jerky recipe. The directions for making beef jerky that we provide come with accompanying photographs that illustrate what the finished product ought to look like. We are confident in saying that our teriyaki beef jerky recipe is one that you will return to time and time again to make.

Because fat does not dry and hastens the process of degradation, beef jerky must be made from a lean cut of meat. An eye of a round roast is a good option since it is readily accessible, it is not expensive, it is lean, and it is simple to trim. Putting it in the freezer for an hour or two before you slice it will make the process a lot less difficult.

Also check: Let’s Learn All About Snake Juice Recipe With Us

Cut the Beef to give it a proper shape

Following the direction, cut the meat to an equal thickness of between 1/8 and 1/4 inch. Instead of cutting the roast in half horizontally, you should cut it in half vertically if it is too thick to do so. Before placing the steak in a sealed container and putting it in the freezer for at least half an hour, trim the steak of any excess fat that it may have.

Get the marinade ready to use

Put the meat in a plastic bag that can be closed again and is flat. Following that, using a whisk and a separate bowl, incorporate the remaining components of the recipe.

After placing the meat in the container, the marinade should then be poured over it. To ensure that the marinade is evenly distributed on the meat, you should toss and stir it. Cover and place in the refrigerator for at least two hours and up to one full day, turning once during that time.

Are you prepared to start the meal? Adjust the temperature in the oven so that it reads 170 degrees Fahrenheit. Bring the meat along with the marinade to a boil in a Dutch oven or another large saucepan. Once bubbles begin to form, reduce the heat to low and continue to simmer for another five minutes.

To dry the jerky, use tissue

Place the meat in a skillet or on a dish that has been lined with paper towels in order to absorb any extra liquid. It will take an excessively long time to dry the meat if it is not first well dried. Discard the liquid as waste.

Arrange the beef strips in a single layer on the wire racks that are placed inside the baking trays that measure 15 inches by 10 inches by 1 inch. The beef should be dried in the oven for four to five hours, or until it gets the ideal texture of being leathery and dry. It is vital to rotate the pans at regular intervals to ensure even cooking.

Take the jerky out of the oven as soon as it appears to be completely dry. To remove any oil droplets from the jerky, you should pat it dry with paper towels before serving. In addition, before plunging in, it is strongly recommended that you wait until the batch has completely cooled down.

Ta-da! You have made a variety of tasty beef jerky that will last you throughout the whole week and keep you from feeling hungry.

Also check: Try These Keto Ground Beef Recipes If You Are On A Keto Diet

How to Dry Out and Smoke Beef Jerky?

If you buy a commercial dehydrator or smoker, rather than using the oven to prepare beef jerky, you can avoid using the oven entirely. If you are determined to follow this course of action, follow the first six steps of the recipe exactly as they are written, and then switch on the appliance that you prefer to use for cooking. Use the temperature and drying time that is specified by the manufacturer in order to dry your meat correctly.

After smoking the jerky for two hours at a temperature of 170 degrees Fahrenheit, the Taste of Home Test Kitchen dried it for an additional one and a half hours at the same temperature. You will need at least a few hours to finish the process of drying your jerky, regardless of the method that you choose to use to make the beef jerky recipe.