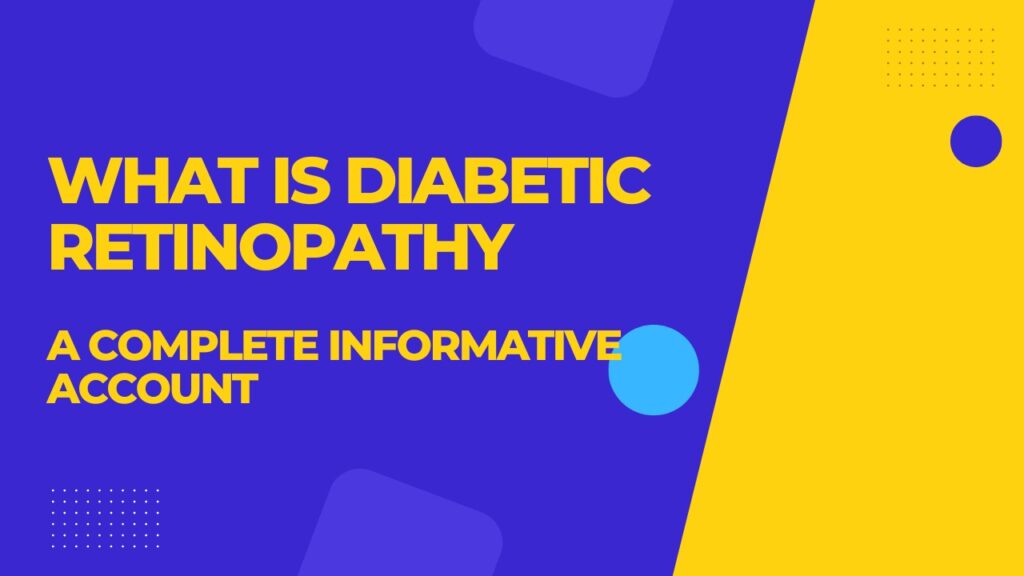 This is the most common form of diabetic eye disease, and it can happen to people with both type 1 and type 2 diabetes. If a person has diabetes mellitus and isn’t getting the right treatment for it, or if they are getting the right treatment but have had diabetes for a long time and have a chronic condition, their risk of getting diabetic retinopathy goes up every day. Almost always, people with this condition will have symptoms in both eyes.

Those who have diabetes mellitus, high blood pressure, high cholesterol, nephropathy, and a chance of getting the renal disease. You should give read our detailed article on Diabetes Mellitus. During pregnancy, a woman’s chances of getting type 1 or type 2 diabetes or diabetic retinopathy go up a lot. Read our article on gestational diabetes to get a better understanding of the disease.

What is the actual cause of diabetic retinopathy?

Before talking about the symptoms, it’s important to know how this problem shows up. If a person has high blood sugar for a long time, the small blood vessels in the retina get weak and damaged. Eventually, this makes the blood vessels close off. Because of this, the retina won’t get any blood or food.

During this process, the retina goes through a number of changes, all of which affect the patient’s ability to see well in the near future. If this damage gets worse, it will have a big effect and could even lead to blindness.

One of the changes is the growth of new blood vessels to replace the ones that were damaged. It will be weird for new blood vessels to grow. In the form of bleeding or leakage, they will eventually get weaker and break, hurting the retina. This is called choroidal neovascularization in the medical world. When there is inflammation in the retina, scar tissue can form. The formation of scar tissue, which could pull the retina away from the back of the eye, could lead to an increase in intraocular pressure.

The blood vessels that feed and drain the optic nerve can be seen clearly in the left eye, which is a healthy example. The right eye has blood spots and fluid, which are signs of diabetic retinopathy. This is because the blood vessels in the eye have burst. People with diabetes may have trouble seeing for a number of different reasons.

The patient shouldn’t have any trouble seeing. But the patient’s eyesight is more likely to be affected if the condition is severe and there are many microaneurysms.

Some of the time, blood or fluid could get into the retina through these protrusions. The macula is in charge of our central vision. If this part of the eye gets hurt, it can be hard to see, especially when reading. Because of this, the fluid pressure in the area goes up, which causes localized swelling. This problem is called macular edema. In the medical world, this problem is called diabetic maculopathy. At this time, nerve fibers might start to grow and veins might get bigger. There may be a link between how bad retinopathy is and how many damaged blood vessels there are in the retina.

The proliferative stage also called the advanced stage, is the second and worst stage of diabetic retinopathy. It was made to protect the retina, which can be seen by the fact that it has new blood vessels.

This type of diabetic retinopathy is caused by abnormal new blood vessels that leak blood into the vitreous fluid. This causes scar tissue to grow, which could move the retina out of its normal position. Because it puts pressure on the optic nerve, high intraocular pressure makes glaucoma more likely.

What do we now know about diabetic retinopathy symptoms and warning signs? Most of the time, there are no obvious signs or symptoms before this condition starts. Even though macular edema is usually linked to sudden loss of vision, it is possible that no symptoms will show up for a while.

Macular edema makes it hard for people to do things like reading, drive, or recognize faces because they can’t see clearly. Images may look blurry or dark to them, and the way they look may vary from eye to eye. During the course of a day, a person’s vision might change.

In its early stages, diabetic retinopathy symptoms are invisible. People with this illness usually have good vision, and a regular eye exam will not show any signs of the disease. A funduscopic examination is needed to find microaneurysms.

Initially, you could see blood vessel narrowing and blockage, which leads to retinal ischemia. An angiography, on the other hand, is needed to get a more accurate picture of the damage.

In severe cases of diabetic retinopathy, when the abnormal new blood vessels burst, blood can leak into the vitreous humor. This makes it hard to see and makes the eyes feel bad. The first loss of blood isn’t too bad. Most of the time, floaters cause the eye to see a few small spots. After a few hours, most people can no longer see these dots. It is essential for you to detect diabetic retinopathy symptoms early so that the treatment becomes possible.

How Is Diabetic Retinopathy Treatment Possible?

When diabetes retinopathy is found, it can be treated in a number of ways. The diabetic retinopathy treatment depends on how bad it is and when it is found. tries to slow or stop the illness from getting worse.

When diabetic retinopathy is mild or moderate and not growing, or when it is in its early stages, treatment is not needed right away. Your ophthalmologist will keep a close eye on your eyes, though, and based on what he sees, he will decide whether or not to suggest therapy.

It’s important to go for diabetic retinopathy treatment without delaying it. Talk to your diabetes mellitus doctor, preferably an endocrinologist, about whether or not you might benefit from changing how your condition is treated. Most of the time, keeping blood sugar levels normal slows down the progress of diabetic retinopathy.

Surgery is now the best diabetic retinopathy treatment in its later stages, as well as proliferative or established macular edema. Depending on how bad your retinal problems are, you may have different options.

What is Diabetes Mellitus – Complete Information on the disease

Recognize Gestational Diabetes Before It Gets Worse